Unicorn: What is a blockchain developer?

From the earliest times, people recorded the exchange of different services and goods. With the digital world evolution, transaction recording has become rather complicated. World trade and commerce are growing rapidly creating a network that is too vulnerable to breaches, errors, and fraud. Modern supply chains use intermediaries such as the government, banks, and dealers to ensure security and reliability. That adds additional expenses and consequently increases the cost of final products. Such processes as smuggling hamper officials to collect export taxes. This is where blockchain technology can help people resolve the issues mentioned above. Due to its unique features, a public digital ledger offers transparent transactions that are stable to various vulnerabilities.

People who create magic networks are called blockchain developers. They are capable to create a system providing secure and synchronized recordings of blocks. Some people call these specialists unicorns but they are not doing extraordinary things. It’s because a lot of people still are not completely aware of how chains of blocks work, they consider bitcoin developers to be unicorns. Let’s figure out what actually these people do.

Check out a related article – “The list of public records is growing: Do you want to create yours?”

Bitcoin was invented over 10 years ago, but the rate of innovation has only reached a fever pitch in the last couple of years, especially with the launch of Ethereum in 2015. Most of the new companies and ideas in this space have been built on top of Ethereum, which is still very immature. Even if you start now, you can realistically become a world-class expert within a few years. Most people just haven’t been doing this that long, and it won’t be that hard to catch up. Starting now would be analogous to deep learning experts who began studying the topic in the late 2000s.

Most of the best and brightest students at universities are focusing on machine learning, web programming, or game development. Sure, blockchains are getting more popular in the public discourse, but they’re still a weird and subversive topic on which to stake your career. Early on, blockchain was exclusively the realm of cypherpunks, paranoids, and weirdos. That’s only recently begun to change. Just by being a curious and open-minded developer, you’ll bring a lot of value to space. If you are searching for developers to build a crypto-based project you must understand precisely which skills a typical crypto developer should possess. We conducted in-depth research on the job requirements in the cryptocurrency industry.

Pay attention to the skills and experience your candidates should have. Here are the major requirements to a blockchain programmer from potential employers:

Candidates having relevant work experience will slice and dice your project more quickly than beginners in the industry.

Experts in software development with over 2 years of experience will also save you time and money. The competence on the market is so high that you shouldn’t spend the time for teaching developers to work with a particular technology. Otherwise, by the time your project is finished, it will become an old hat idea.

Cryptography has become as much popular as ever before. Blockchain companies hire specialists in this field. So, your developers need to be at least familiar with cryptography, algorithms and maths problems solving, and data structures

Blockchain programmers have to know how a cryptocurrency marketplace works, be familiar with the essential terminology, and know the main principles of trading.

6. The ability to work in accordance with agile methodology

This skill is essential for all developers so that the workflow and progress are clear to all stakeholders.

What other skills should a blockchain developer possess?

Beyond that, this position enjoins developers in active communication within the community. Without having all these skills, developers won’t be able to solve blockchain problems.

The difference among blockchain experts

Like any other new technology, blockchain has introduced new professions to the IT world. We should mention and distinguish at least three new specialties:

The majority of developers say that it’s possible in theory to build a blockchain project using any programming language. However, C++ is considered to be the most popular for this purpose. Developers who write code in native languages using different frameworks and possessing knowledge in maths and algorithms are more likely to find a job with good prospects than those who have poor knowledge in this area.

Looking for blockchain developers? Usually, recruiters search for potential candidates using traditional methods: contacting specialists via professional networks, meeting them on hackathons, or various meetups. If you plan to recruit real experts you must also find out more about blockchain salaries.

How to understand that a particular developer is the right person for your blockchain project?

It’s not all about technical skills that define how professional a developer is. Personal qualities are also of great importance. Like any other developer, a blockchain specialist must be goal-oriented, diligent, and persistent. It’s quite difficult to find a developer with a strong background in blockchain that’s why recruiters are often recommended to pay heed to those people who show a great interest in the technology. What is worth paying attention to:

Do you actually need blockchain for your business?

It seems as if every business needs blockchain. How did it come? Experts explain that there are at least two reasons for this. The first one is that technology is really attractive to businesses. The second one is the desire to control this spontaneous interest. Blockchain is able to solve business problems and can be applied in ICO projects to raise capital.

To answer this question we recommend auditing your project and identify if it is adaptable to the blockchain. Today, a lot of software development companies offer audit and consulting services to businesses to conduct in-depth research.

Learn about new ways of running a business: “What is a smart contract?”

For nigh on several years the number of blockchain jobs advertisements on Linkedin has increased thrice. This proves that commercial organizations of different levels are going to implement blockchain technologies. The demand for such specialists exceeds supply as most of them are involved in numerous cryptocurrency and blockchain startups. According to Financial Times, the total number of open blockchain vacancies on Linkedin is over 1,000.

At the same time, around 10,000 profiles contain blockchain skills. However, we should mention that these profiles belong not only to developers but also to executives, journalists, and other people whose work is related to this technology. It is not surprising that blockchain developers are offered higher salaries than developers working with other technologies. Today, according to Financial News, cryptocurrency and blockchain specialists are paid around $130,000 per year whereas the most experienced can be offered around $650,000 per year.

In contrast, senior traders and other top specialists working in the financial sector of Great Britain earn from $360,000 to $4000,000. Thus currently, the most lucrative profession in financial sector is the position of developers working with new technologies.

The CEO of Linkedin in Great Britain, Josh Graf offers developers from related spheres like cryptography and machine learning to add blockchain to their stacks. It will allow increasing their rates. According to Linkedin, blockchain vacancies are opened not only by financial companies but by giants like Fujitsu, Toyota, Intel as well.

The success of Bitcoin and other cryptocurrencies as well as the great demand for blockchain affect the human resources market greatly.

According to Glassdoor, blockchain programmer salary is approx. $80,000 per year. This figure is based on over 13,000 individual reportings from US employees receiving a crypto developer salary in the industry. The distribution of wages is from $55K to $112K. The salaries for this profession grow rapidly together with a demand for top experts in the domain.

Let’s compare Bitcoin or Ethereum developer salary per month in different parts of the world.

Here is a percentile chart demonstrating the blockchain salary distribution slightly similar to the Glassdoor data.

In Switzerland, for example, the salaries of blockchain developer have increased rapidly up yo $180K per year. Such a fast rise is connected to the fact that the country has become a central spot for companies launching ICO projects. The high salary starting from $120K is explained also by the high cost of living.

Blockchain developer salary in the United States of America

According to Indeed, as of July 2021, average blockchain developer wages per year in the United States are as follows:

With an increased demand for blockchain experts, a lot of computer science students strive for getting employed in this industry to get a hyperledger developer salary.

Blockchain developers from the UK earn around $65,000 per year. However, as mentioned above, there are various kinds of specialists with blockchain technology skills. So, the salary depends on the role and responsibilities.

Blockchain engineer salary in Germany is around 3000 euros per month. What is most important about all this — the salary of a developer will directly affect your blockchain project development cost. So, if you want to save costs, consider outsourcing for turnkey software development or staff augmentation for quick project scale-up with additional resources or required skills.

How to become a blockchain engineer

If you wish to create a digital currency, write smart contracts and blockchain applications, first off, you should have enough knowledge about this innovative stack. You may definitely learn the essentials yourself as a lot of projects are available on GitHub. It is recommended also to take some courses if you are a beginner in cryptocurrency development to get a blockchain certification.

If we speak about smart contracts on some of the platforms, for example, Etherium, then you will need no basic knowledge. The only thing needed is the skill to google and a little bit of patience. Smart contracts are developed for people who have no knowledge of coding. However, if you would like to build blockchain products, you should get a strong knowledge of this technology.

The most important thing is to understand how the technology works. Most limits in blockchain development are related to the peculiarities of this technology which don’t allow using some project patterns. However, once you understand the technology, you won’t face any difficulties in mastering one of the programming languages required for writing smart contracts.

Can I learn blockchain informally?

It is obvious that you can master blockchain technology yourself as a lot of projects are available on GitHub. The main problem is the time required to obtain enough skills. On the one hand, there is a lot of information about blockchain but it is quite fluffy that’s why you will spend much time filtering this data.  On the other hand, there are risks that you will just copy the code and never learn to code. It is highly recommended to take special courses where you will be able to get the basic skills very quickly.

It is also highly recommended to read the White Paper of that cryptocurrency your future project will be based on. As you see, there are no special skills a developer must obtain to handle ICO, crypto-based projects, exchanges, etc. What is actually required is the strong desire to learn and practice P2P essentials.

Our developers are qualified in building sophisticated peer-to-peer networks and blockchain-based projects. The solutions we offer are secure and scalable so that you can rest assured that your project will be flexible to any changes and requirements. Should you have any questions about our stack feel free to check it out on our website or ask our blockchain team.

What do we offer?

Our team of blockchain experts provides the following services for the fintech market:

We use the most innovative technologies in our stack to deliver state-of-the-art solutions to our customers. The major benefit of cooperation with our experts is that all of them have a strong background in the fintech sphere. We are focused on applying the latest approaches in project management to deliver high-quality products on time. 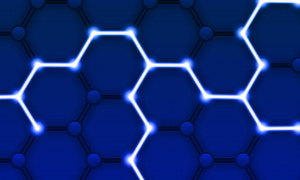 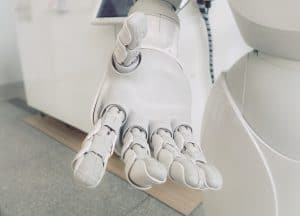 Robotics in retail industry: Use cases and advantages 22.10.2021 Business 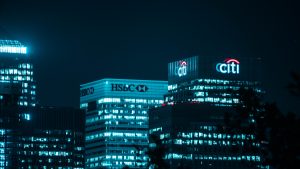 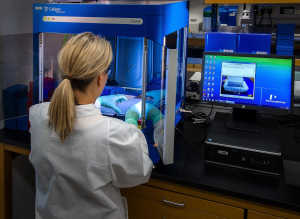 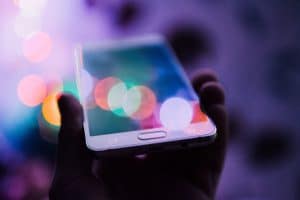