What you need to know to consider development cost

Salaries might vary according to skills, experience, and country of residence of developers. In this post, we provide average annual incomes of different software developers in the USA and Europe with regard to experience, skills and particular tasks. This influences the overall cost of the project and you can predict the expenses before you start your cooperation.

Salaries in the IT sector highly depend on the programmer’s experience: entry-level, mid-career, or senior level. A choice of stack such as C++ , C#, Java, JavaScript, .NET, PHP also influence the earned income very much. Location greatly predetermines an average salary range, so we decided to list the countries with the highest developer costs. 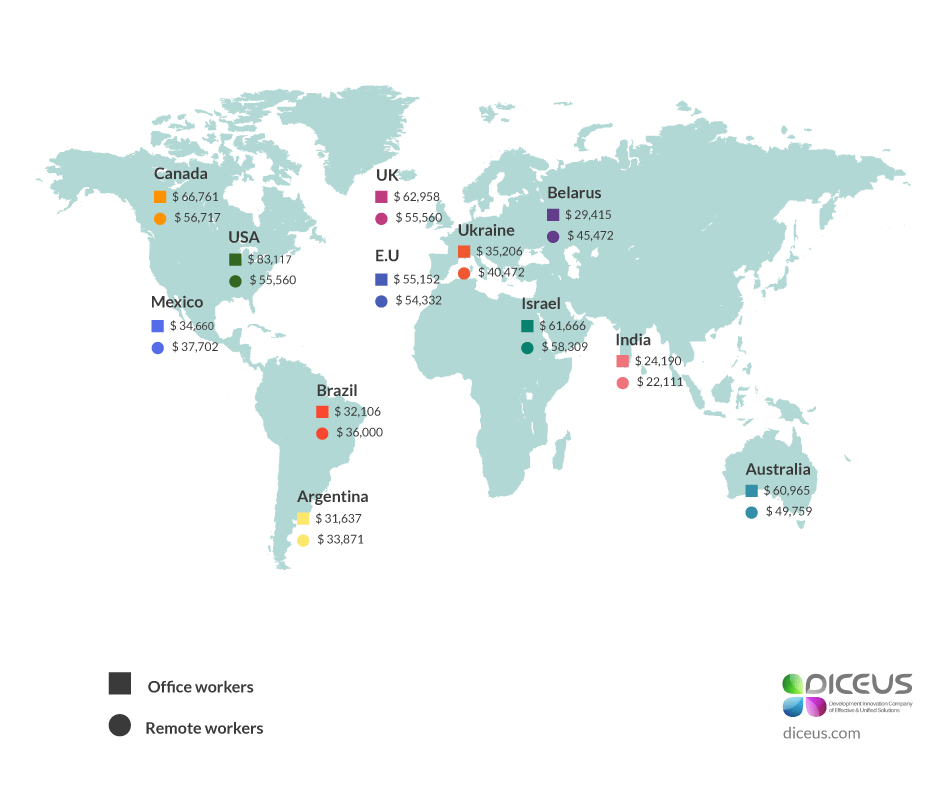 The USA can boast of the highest developer salary that is about $90K per year. Canada comes second offering programmers about $70K. UK, Israel, and Australia have IT specialists earning around $60K–$65K annually. Mexico, Ukraine, and Belarus come last on the list, offering IT experts around $35K per year.

Here is a chart showing an average salary range that depends on the programmer’s experience: 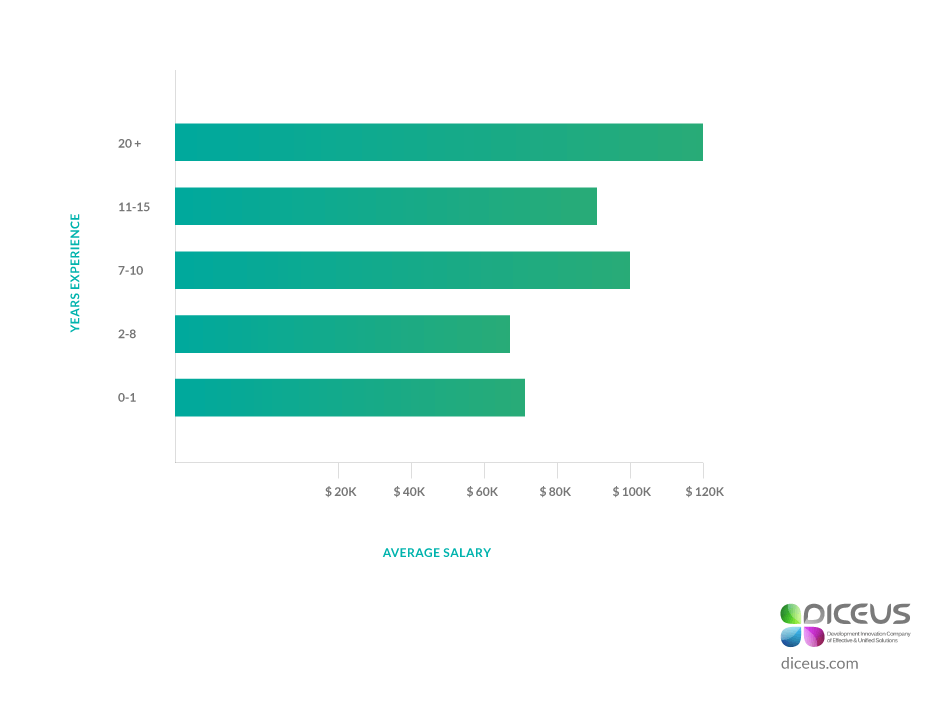 Let’s take a closer look at the countries that are the most progressive in the development of IT technologies.

Software developer salary in the UK

British software engineers usually earn $62,500 per year- it’s stated at Techtarget . In the UK, the difference among the entry-level specialists and the most skilled IT experts is probably the biggest. In this country, a beginner might earn as low as $24K, and an experienced professional can reach $72K of income. 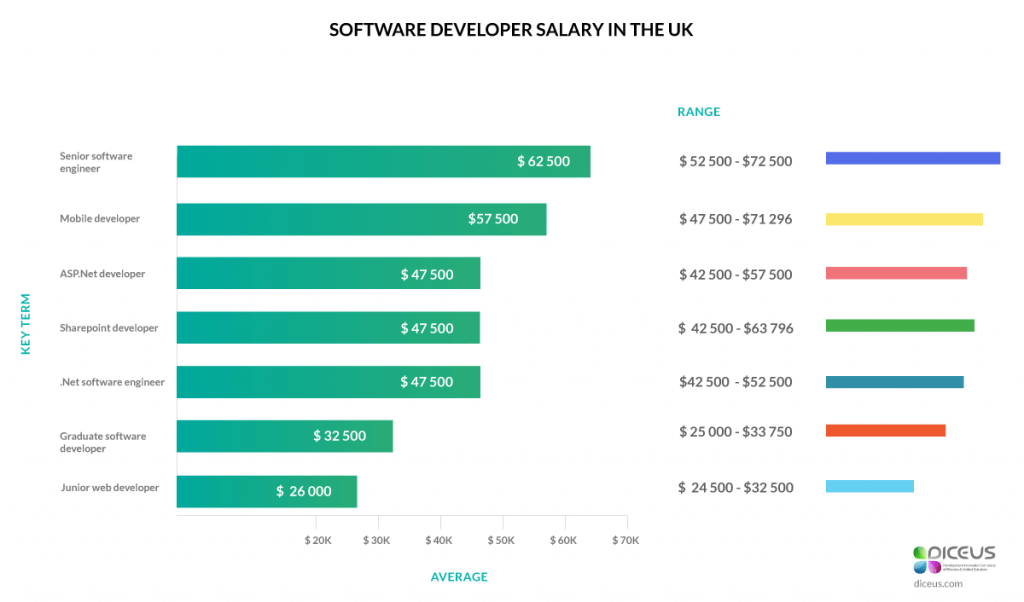 In Germany, programmers usually earn up to $50K per year with the local average sum that is about $47K. As for entry-level specialists, they make only 6% less than their highly experienced counterparts. 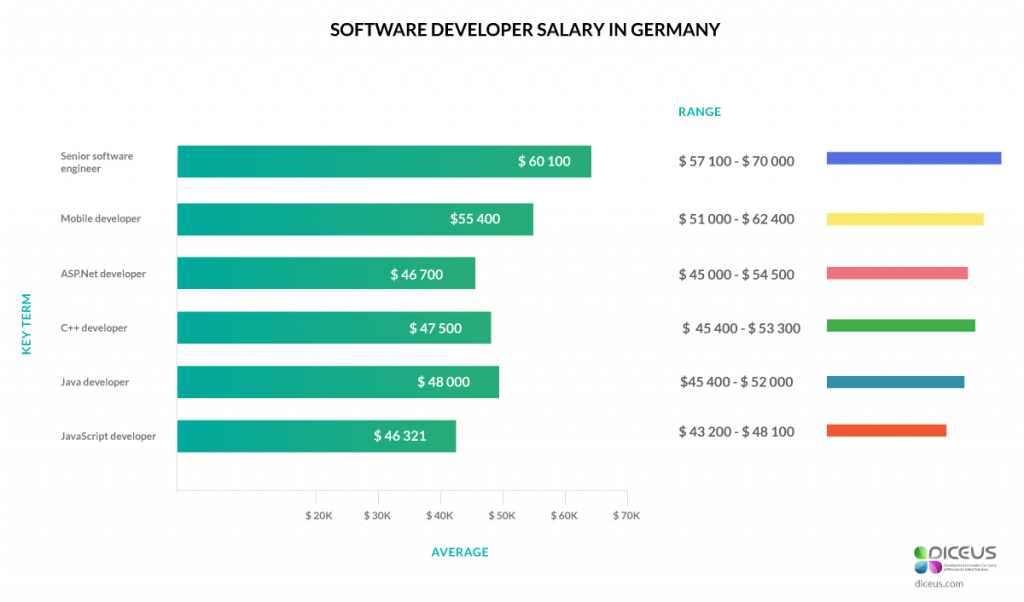 Computer engineer salary in Germany also depends on their knowledge of programming languages. For instance, C++ is the highest-paying language with the average salary of $53.3K per year. Java and .NET developers earn almost the same amount of money — approximately $48,370 per annum. However, JavaScript technology allows programmers to earn less than others — $46,321 per year.

Software developer salary in the USA

American IT experts are considered to get the highest salaries in the world. Their salaries vary greatly: the lowest one is $60,956 whereas the highest salary can go up to $116,983. The average programmer salary in the U.S. is approximately $90,052 per year. 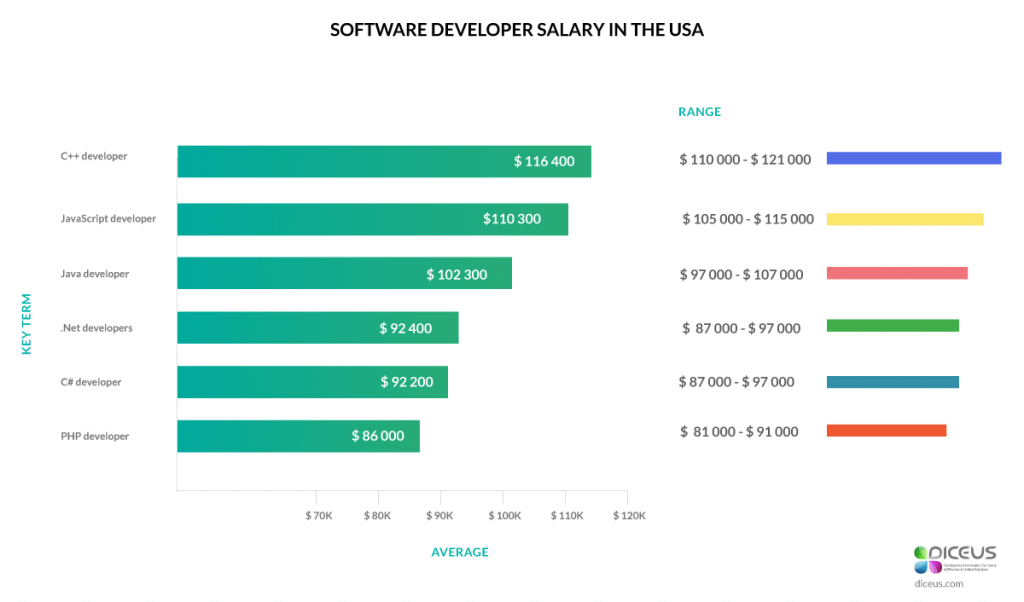 Similar to other countries’ experience with tech, C++ engineers get the biggest annual salaries (up to $117K). JavaScript programming language allows IT specialists to earn a bit less (about $110K per year). The average software development rate is $102K per annum in the US. 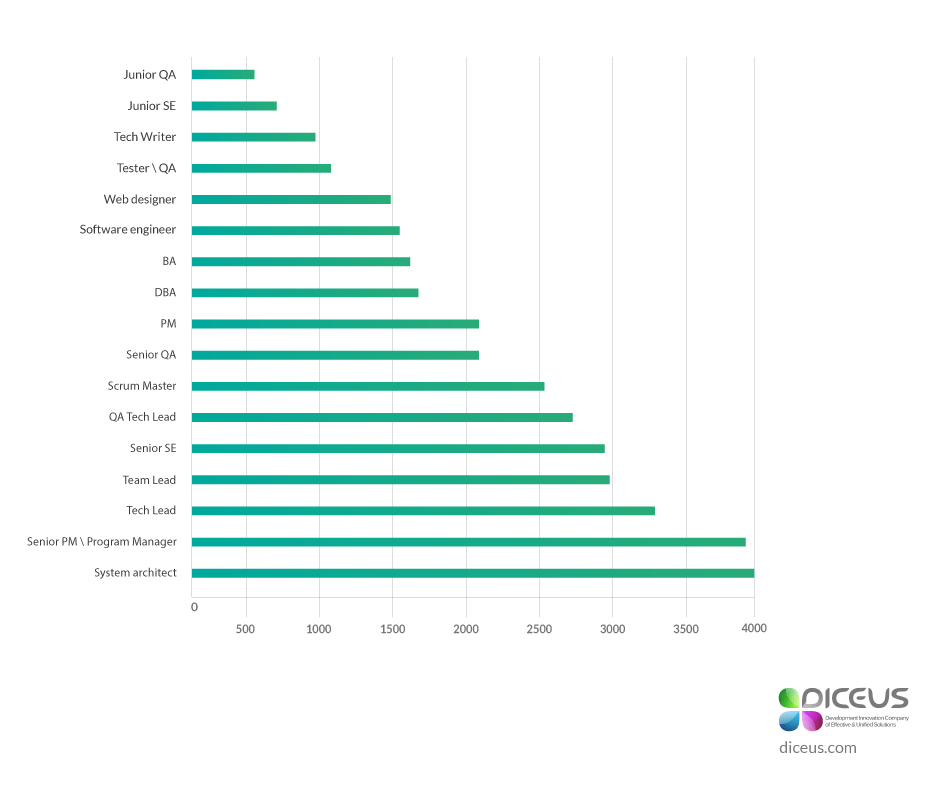 Ukrainian programmers charge significantly lower fees than their European counterparts. That’s why an increasing number of CEOs choose this country to develop their software projects. In fact, Ukraine comes 1st in Europe Colliers International and ranks 4th by the number of certified IT experts in the world.

36,000 of tech professionals come out each year, and at the moment there are over 185,000 software engineers who usually work with West European and North American clients. No matter what size your business is, Ukrainian programmers will help you to bring it on a completely new level.

Median salaries of ukrainian software developers (as of July 2019)

To calculate the total cost of the project, you should be aware of the average salaries and know how much time it can take to complete the task.

These salaries show the rates of the USA and the UK. If taking into account Northern Ireland that is the part of the UK but exists independently, on average, web developers have a salary $47 000 per year.

These are hourly rates in various locations: 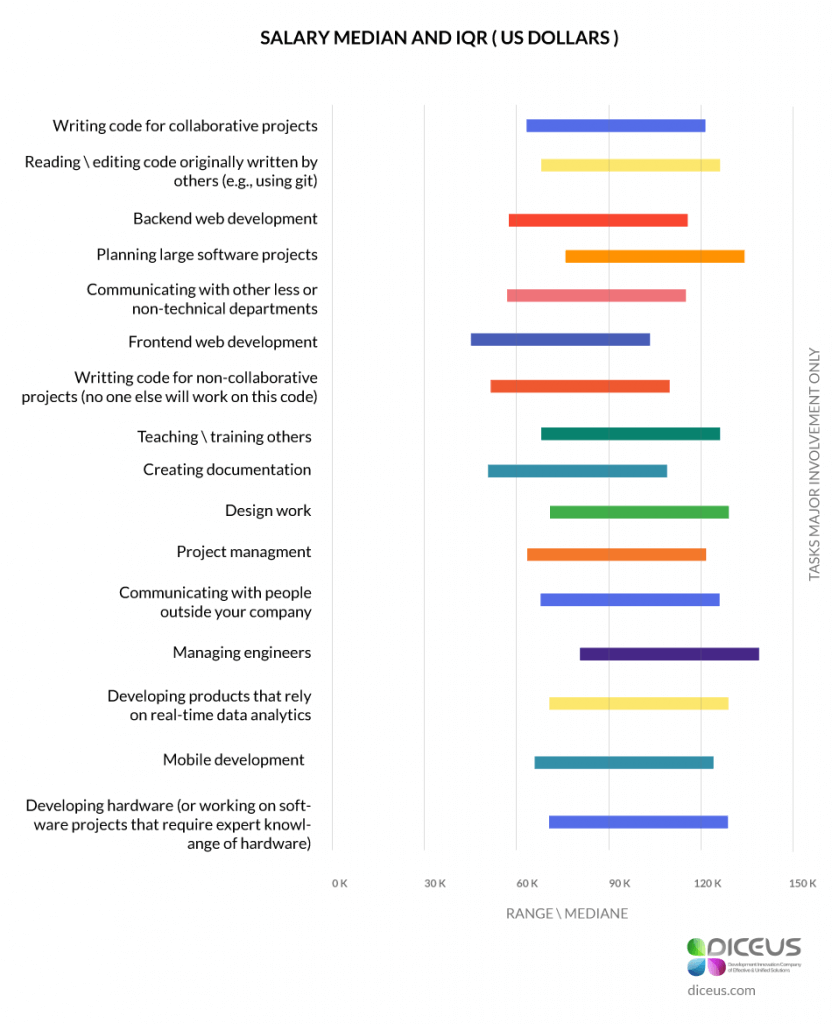 These salaries show the rates of the USA and the UK. If taking into account Northern Ireland that is the part of the UK but exists independently, on average, web developers have salary $47 000 per year.

If you need part-time software development services, these are hourly rates in various countries:

How much time do you need to build an app?

Let’s have a look at some common components or features of the apps that you can have in small, medium or enterprise solutions. 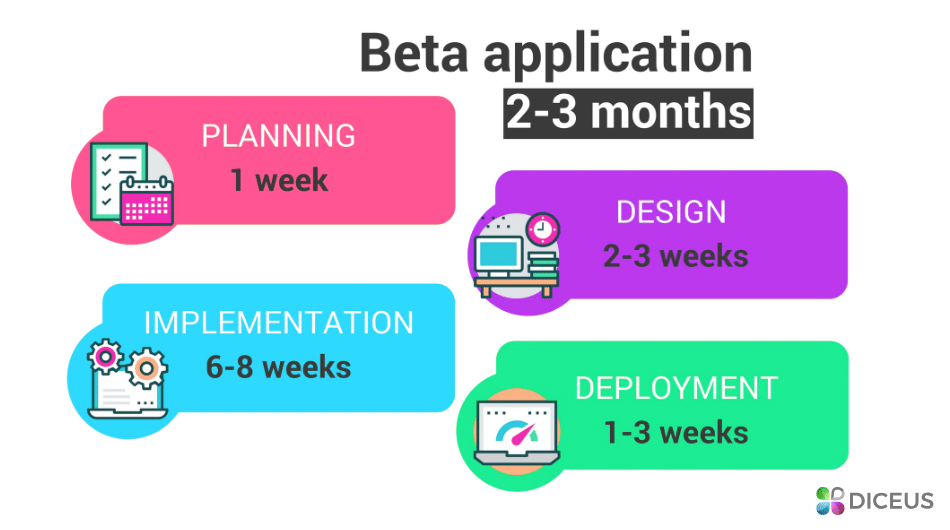 It’s good to be aware of the time that is required for collecting the requirements for the future app and making a scope of the new project:

What about building UI/UX? Here are the approximate terms:

What about testing? How much time will developers need for this stage of SDLC? Have a look: 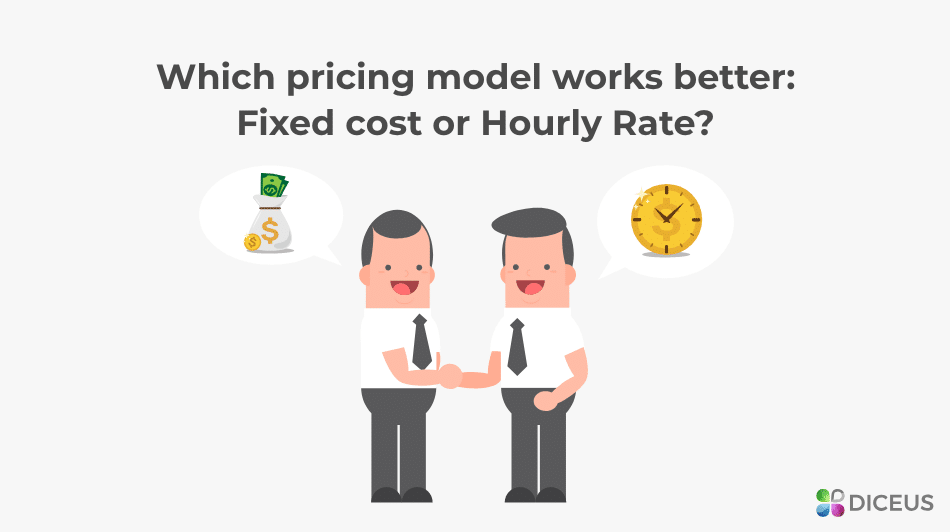 Fixed-price approach is good for:

Hourly-fee approach is good for:

Looking for a reliable vendor?

DICEUS is a technology partner in various domains and we deal with a fixed-price approach. A business analyst conducts thorough research to understand how future software will help to reach all required goals. We make a scope of the project and plan our cooperation. What you get is a clear roadmap with the price for the whole project – you don’t pay for hours, you pay only for the successfully delivered result. 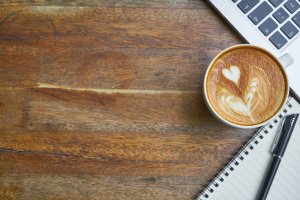 A dedicated Java developer – everything you should know 20.01.2021 Business 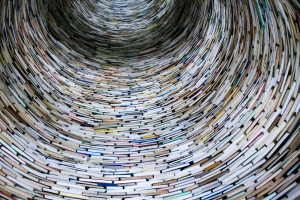 Best DWH (data warehouse) solutions on the market and why you may need them 26.03.2020 Business 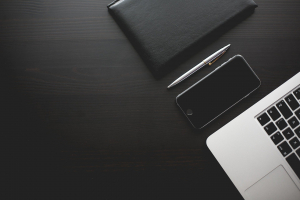